Getting the job at Ritual Entertainment was one half of the battle. Trying to get into the United States was a whole different story. Of course it all worked out, and Sin was the first professional game I worked on.

In 1996 and 1997, I hung out on IRC all the time. It was the hot new thing; chatting with people from all over the world was pretty damn cool and novel. (It wasn’t a bad way improve my English, either.)
More importantly, it was a great way to make connections. The #quakeed and #level_design channels were two of my main hangouts, and the regulars were considered the elite of Quake modding. As the Dallas gaming scene exploded in 1997, with companies like Ion Storm, Ritual and Rebel Boat Rocker popping up (Seattle would soon offer additional options through Valve, Monolith and Cavedog), I saw many my IRC editing friends getting offered jobs as professional LDs. id had been the trailblazer, now everybody was trying to follow suit, which created a huge demand for people who could create 3D levels. But even with all those people getting hired, it didn’t occur to me for the longest time that I might be able to do the same. I was in Germany, after all!

I had graduated from High School in 1995, been deemed unfit for (in Germany mandatory) military service because of a broken knee, and enrolled at the University of Essen right after high school. Supposedly to study English and Biology in a teaching capacity. The “german” and “biology” parts weren’t a big stretch – I liked writing, and biology had always been my forte. It was the “teaching” that was the unusual part. I’m just not your traditional classroom teacher who likes working with children – nothing bad about that, but it took me a while to come to that conclusion for myself. So my university time was a schizophrenic experience – I liked the subject matter, I just didn’t like the final destination I was headed for. And that’s why my heart wasn’t fully in it. 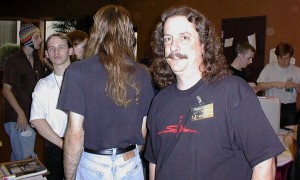 Me, stalking the Levelord at QuakeCon 97. Photo from Wendigo’s Quake Galleries

My heart very much was in level design, however. And when it finally dawned on me that hey, maybe I could move to the US and be a professional level designer, that was a major revelation. Mike Wardwell, another #level_design regular who had been already hired by Ritual Entertainment (still called Hipnotic at that point), hooked me up with an interview at the company. At this point, Beyond Belief had been released, and served as a great calling card. So Ritual flew me out for Quakecon 97 and a few additional days, and my first visit to America turned out to be a very pleasant one. The Ritual people were cool, hanging out at Quakecon was great, and I felt like I belonged there. I guess I didn’t feel like I was interviewing or auditioning for the job either, and that might have helped. I was just hanging out with the rest of the company, acting as if I was supposed to be there.

Soon afterwards I got a job offer, and I said yes without even knowing how much money I would be making. But that’s where the real challenge began. How to get me to work in the US legally? 3D Level Design was still a very new profession in 1997, the immigration authorities didn’t know what it meant. Ritual had no experience in the matter, either, and after the initial (pretty ludicrous) idea of getting me a student visa was discarded (student by day, illegal level designer by night – the then CEO even took me to the University of Dallas to check out the requirements), we found an immigration lawyer that other software companies had used to get European employees into the country. And since nobody knew what “3D Level Design” was, the lawyer applied for an O-1 visa, which we backed up with as many recommendation letters as possible from professional designers and from people who had played Beyond Belief. The application was approved, but I had to endure an excruciating 8 months of wait until I got the go-ahead.

My life in Dallas is best described as “turbulent”. Work was cool but, quite frankly, somewhat disorganized. I willingly crunched most of the 8 months I worked on Sin. I slept in the office. We were always a step behind the schedule. I quickly gained 10 pounds. Still, I wouldn’t want to miss that time in my life for anything. The atmosphere was creative and introduced me to Cinefex and Foxtrot. The work was a great learning experience. The people were great and made my transition to America easy and seamless. I met friends who I’m still in contact with today; in fact, fellow LD Charlie was a groomsman at my wedding. 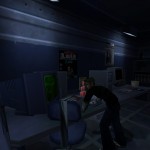 My Sin Intro cutscene. After a while, the dialog started creeping into my dreams.

I learned a lot, too. Creating real world environments for shooter gameplay was a real gear change; making arbitrary Quake dungeons had been much easier. Sin’s level scripting language was fantastic, and after I reconnected with my inner programmer I was able to create some very elaborate gameplay sequences. Using SinScript, I was also able to create all of the game’s in-game cutscenes – the first in-game cinematics found in a major FPS game. Most of the movies I did for this game were pretty awful (blatantly disregarding all principles of cinematography), but the intro turned out pretty cool. And it’s fun to have that tiny place in gaming history 🙂 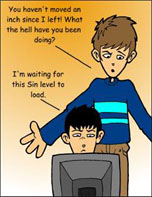 Sin turned out to be a good game – with some fatal flaws. The initial release had incredibly long load times (but hey, we made the very first Penny Arcade comic!) and a few showstopper bugs. Oh…and Sin was released alongside Half-Life! So Sin didn’t do well at retail, but I feel that the game is better than it was given credit for back in the day. Sin had incredibly interactive environment, an ambitious (if somewhat clumsily executed) story, and some very cool gameplay and scripted sequences. Creativity was everywhere – it just wasn’t pulled together to form one coherent whole. Speaking of creative people, the team that worked on the official Sin mision pack, Wages of Sin, would go on to make Medal of Honor for EA and later create the Call of Duty series of games. Many of them came from the Quake community as well.

I left Ritual after Sin was completed. Partly because development had left me more burned out than I wanted to admit to myself at the time. Partly because Charlie had moved on to work at 3D Realms. And partly because I didn’t feel much love for the follow-up game that Ritual had lined up, Heavy Metal FAKK2. As I made my trek across country to Virginia and Legend Entertainment, I left with no regrets. Sin was a neat little game to be proud of, even though it could have been more.

Ritual tried to revive the franchise a few years ago with Sin Episodes, but abandoned the effort after one installment. The company still exists with a couple of the old principals on board, but they are now creating casual games for Mumbo Jumbo.